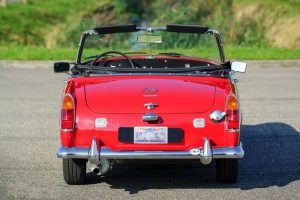 Do you know who I am?

There I was; just calmly cruising down Ramsey St. going past the Walmart in Fayetteville, NC.

I was behind a fire engine red MG with the top down driven by the typical balding insecure male in his 50’s. I saw his arm go straight up and him flick away a cigarette butt which naturally landed on my windshield showering sparks up my windshield. I noted that the cigarette butt had lodged down on my wiper and figured that since I had already secured the evidence I might as well write the citation that should go with it.

I activated my blue lights at a point where the violator should pull off the road into a Shell station lot. The violator did not pull into the Shell station. In fact the driver appeared to be ignoring me. Not too concerning especially since the violator obviously wasn’t aware of me being right behind him when he flicked away the cigarette butt.

I activated my siren to go along with my blue lights and repeatedly pushed that nicely irritating ‘BRRRAAAPPPPP’ horn button as well just to be sure that I gained the violator’s attention.

After a couple of minutes of this the driver finally pulled over to the side of Ramsey St. just before the VA. Not wanting to conduct a traffic stop on a busy four lane highway in a city known for some of the worst drivers in the known world I got on my PA and instructed the violator to pull forward and make a right into the graveyard across from the VA. The violator appeared to be somewhat agitated, waving his hands about and shouting something that I couldn’t hear over the traffic, police radio, radar, and other noise makers in my patrol car, however he complied.

I pulled in behind the violator, secured the now burned out cigarette butt in a plastic baggie, and made my approach scanning for threats, putting my hand on the trunk to put evidence on it in case I was shot and to make sure that the trunk was latched and not a threat also. As I approached the violator sharply, loudly and vehemently demanded,

Now I can’t even begin to tell you what prompted me to react the way that I did because I’m usually not this quick a thinker. Maybe it was the hand of God using me as a lesson to this arrogant mouth breather.

I gave him the usual spiel that I was Officer Schrecker, the reason I stopped him was for littering, and could I see his driver’s license and vehicle registration. All the while the violator kept demanding to know if I knew who he was. After receiving the required documents I instructed him to stand to the rear of his vehicle and then I took his keys out of the ignition fearing that this arrogant mouth breather would try to drive away making the situation a vehicle pursuit.

Having secured everything necessary I began his lesson. I went into my wide-eyed innocent compassionate country bumpkin mode and asked, “Are you alright sir?”

He stopped berating me and while glaring at me asked “What do you mean?”

I said, “You seem confused and forgetful and I’m concerned about you? Do you need medical attention sir?”

The violator went off on another tirade against me again demanding to know if I knew who he was. I decided that this man seriously needed my special kind of help.

I got out my handheld radio and requested dispatch to send me fire medics. I told dispatch that I had a man who was obviously confused, who didn’t know who he was and kept asking me who he was and that I was afraid that he was having an episode of amnesia and that he appeared to me to be scared and angry because of it.

The violator went off on another tirade against me calling into question my parentage, my intelligence and commenting his opinion of many aspects of my personage. Apparently, according to him, I’m a parentless, fat, dwarf, eunuch of questionable race. Who knew?

While waiting for the fire medics to arrive I scratched out a $500.00 citation for littering and served it on him. Needless to say when the fire medics arrived the violator was an interesting reddish purple color in the face,… spitting, snarling, and in a state of near apoplexy.

I explained to the fire medics that the violator was obviously confused and didn’t know who he was, kept asking me who he was, that I was afraid that he was having an episode of amnesia and that he appeared to me to be having some kind of violent unhealthy fit because of it. I told them that he had asked me at least 18 times who he was. I told the fire medics that I needed to know if the violator was capable of operating a motor vehicle in his current condition.

Now the fire medics are very intelligent souls and I could see that they realized that something was up. I was able to give one of them a conspiratorial wink when the arrogant mouth breather wasn’t directly looking at me.

The fire medics said that the violator didn’t appear to be in any kind of ‘immediate’ danger but that it would take a doctor to make a decision as to whether the violator was in an appropriate medical condition to operate a motor vehicle. Ah yes! Exactly the words that I wanted to hear.

I informed the violator that in light of the fact that he didn’t know who he was and that apparently this lack of knowledge was making him belligerent, argumentative and clearly unstable that I felt that it was necessary that he not drive unless and until a medical doctor examined him and rendered a WRITTEN statement reflecting that he was fit to drive. After all, if he had forgotten his name then he may have also forgotten other important things like which color means stop or which pedal was the brakes. I then called for a wrecker to tow his vehicle and store it until I received said medical statement. I then asked him who he wanted me to have dispatch call and come pick him up.

Well now, for the next five minutes I learned that there were several curse words and insults that I had been completely unaware of despite my many years of military and policing travels and experience. Eventually the violator gave me a phone number and I had dispatch to call and have a ride come pick him up.

The violator’s ride arrived, but just before they pulled off I leaned down to the open window and read his name to him off his driver’s license, which I was also holding until I received the medical statement. It seemed to be the most compassionate thing to do since he had kept asking me his name. I’m sorry to say that the information didn’t help him to calm down any and in fact caused him to launch into another round of disparaging remarks about me, the city of Fayetteville, and the Fayetteville Police Department. I can’t imagine why.

A few days later I was dispatched to an attorney’s office and on arrival there they presented me with a medical statement regarding this violator. I released his car and license back to him, via his attorney, giving the driver’s license to the attorney. While there the attorney asked me to recount what had happened. He about fell out of his chair as he ended up laughing so hard he had tears in his eyes. The attorney agreed that his client may very well never ever ask a law enforcement officer if the officer knows who he is again.